How to Deal With Temper Tantrums at Every Age

29 Dec How to Deal With Temper Tantrums at Every Age

Is your child throwing temper tantrums?

For parents, however, it can be irritating and challenging to deal with. Perhaps you are wondering what the norm is for temper tantrums, how they differ at each age, and how you can manage them as a parent.

In this comprehensive guide, you’ll learn all about temper tantrums at each age and how you can handle them! Read on to learn more!

Tantrum vs. Meltdown – What’s the Difference?

Why does this distinction matter?

Because one is on purpose and the other is not. If you punish children for involuntarily breaking down, you could harm them emotionally. Let us explain.

What is a Tantrum?

A tantrum happens when a child is trying to get something s/he wants or needs. The child will have an outburst that involves yelling and crying. When a child has a tantrum, s/he may even stop in the middle to see if the parent or caregiver is looking at him/her and then continue with the outburst.

This is not an appropriate way to express feelings. Often, children will stop when they get what they want or when they realize that having a tantrum won’t solve the problem.

What is a Meltdown?

A meltdown happens when a child is overwhelmed by sensory overload.  Meltdowns may involve yelling, crying, or shutting down.

For example, meltdown may happen after a busy day at an amusement park. While a child may have had tons of fun, s/he was also processing a lot of sounds, sights, tastes, and textures.

Your child can not control a meltdown that is a result of sensory overload. How to Determine If Your Child is Having a Tantrum vs. Meltdown

If you are having a difficult time trying to determine whether your child is having a tantrum or a meltdown, try to evaluate your child’s situation.

For instance, what exactly are you doing when your child has a tantrum or meltdown? You may be in a busy place, such as a mall. Perhaps you and your little one ran errands all day, and now your child is tired. That’s a meltdown.

On the other hand, if your child wants you to buy him/her something and you say no, your child is probably throwing a tantrum, trying to persuade you buy it for them.

To truly determine how your child is reacting, though, tune in to your child’s feelings. You may even sense when these intense feelings are coming on and work to prevent them from erupting by helping your toddler manage his/her complicated emotions or distracting him/her.

How to Deal with Meltdowns

When your child is having a meltdown, help your child find a safe, quiet place to calm down.

For example, if you are in a store while your child starts having a meltdown, step outside or go to your car until your child can calm down.

Be a calming presence to your little one. Try not to talk too much, or keep your voice soft and soothing. Remember, a meltdown is caused by overstimulation. So try to reduce the stimulation to stop the meltdown.

What Does it Mean When Your Child Has Meltdowns Regularly?

If your child seems to be having meltdowns regularly and without apparent sensory overload, it may be due to stress.

Could your child be under stress? If so, what could be causing the stress? Sometimes, it may be because parents are fighting, one parent is sick, or there is some disharmony in the house.

Keep in mind that even toddlers can sense when parents are stressed out. If you are stressed, it may inadvertently cause meltdowns. If that is the case, talk with your child. Be as honest with them as you can, but use language s/he can understand.

Healthy communication will help to ease any anxiety they might have. Be a comforting, calming presence to your little one, showing him/her that you love him/her.

Why Do Children Throw Tantrums? An Explanation for Every Age Temper tantrums can be stressful for both the parent and child. Nonetheless, as the CDC suggests, understanding and responding appropriately to the tantrum can improve behaviors over time. So, before you throw your hands up in defeat, learn about the various reasons why children of different ages throw temper tantrums. After, we’ll discuss how to handle sporadic tantrums.

How to Stop Temper Tantrums As said before, baby tantrums are inevitable. Children this small can not effectively communicate their problems or thoughts.

For this reason, it is up to the parent to investigate and find the source of their grief. The following questions are a few things you should consider if your baby is throwing a tantrum:

Some babies throw a tantrum because they are frustrated. If that is the case, help your baby achieve his/her goal or remove the frustration. If your baby is afraid or anxious, cuddle, and comfort your little one, removing him/her from the stressful situation.

Remember, your baby cannot yet communicate with you. The only way s/he can express him/herself is to cry. If your baby is crying intensely or excessively, it’s probably because s/he is trying to tell you something.

However, if your baby is crying because s/he was playing with a confiscated toy, try to find a distraction for him/her. For instance, get your baby excited about a different toy.

Whatever you do, remain calm. If you try to punish or threaten your child while s/he is already in the throes of a tantrum, the tantrum may escalate. As mentioned, children who have lost control of their emotions may feel anxious or afraid of how they feel. If you yell, it may make the situation worse. Therefore, your first step should be calming down your child without giving in to bad behavior.

Here is how to stop each type of tantrum:

Even more, according to the Centers for Disease Control and Prevention, ignoring a temper tantrum can be a positive way to stop them.

It shows your child that you will not give him/her attention for misbehaving.

If your child is old enough to communicate effectively, talk to him/her. Your child may experience tantrums because s/he is stressed about something s/he is having a hard time explaining.

How to Stop Toddler Bedtime Tantrums

Toddler bedtime tantrums can make bedtime very difficult! Many children make bedtime difficult because they don’t want to go to bed. This is a type of refusal tantrum.

Toddler bedtime tantrums are very common. In fact, bedtime is a learned routine and will get better with consistency.

Be sure to explain to your toddler what happens next in the routine so s/he knows each step before it happens.

Additionally, if your child doesn’t seem tired at bedtime, you may consider getting rid of nap time. Every child is different, but most children outgrow naps around three years of age. If you are unsure about whether or not your child should have nap time, ask your pediatrician.

Lastly, be sure to reward good behavior, such as with a reward chart. For instance, when your toddler goes to bed without throwing a tantrum all week, perhaps they can stay up an extra thirty minutes on Saturday night, get a new toy, go out for ice cream, get a new bedtime book, or enjoy a trip to the park. A reward chart may encourage good behavior.

Remember, don’t give in to the tantrum. If you allow your child to stay up when they throw a tantrum, s/he will no doubt feel that if s/he throws a tantrum every night, s/he can stay up. This will only start bad habits. Always remember to remain calm and do not encourage bad behavior.

Advice for Parents: How to Deal with Tantrums

Some toddlers throw tantrums often. Therefore, you will have to know more than how to stop tantrums; you also need to know how to deal with toddler temper tantrums.

For instance, it’s always a good idea to have a plan for when your child has a meltdown or tantrum (see the infographics). Your goal should always be to keep your child safe and guide his/her behavior, so the temper tantrum is less likely to happen in the future.

Additionally, find ways to remain calm and keep your composure. Dealing with tantrums can be exhausting and irritating. However, when you yell at your child or give in to your toddler’s demands, it can worsen the situation and even teach your child bad habits.

If tantrums continue to get worse or are becoming too much to bear, you may need to talk to your child’s pediatrician. Keep reading to learn about some tantrum red flags to look out for.

Toddler Tantrums: When to Worry 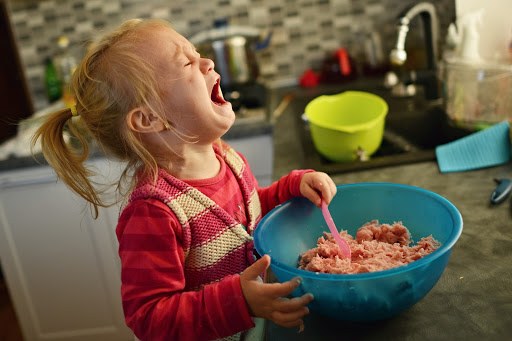 According to WebMD, there are five red flags when it comes to toddler temper tantrums and when to worry. Here they are:

Firstly, if your toddler is showing aggression toward you, a caregiver, or an object during all or most of his/her tantrums, it may signal a disruptive disorder.

Secondly, children who harm themselves deliberately during a temper tantrum (biting or scratching themselves, banging their heads against a wall, or kicking something in an attempt to hurt themselves) were more likely to have major depression.

Thirdly, preschoolers who have, on average, ten to twenty tantrums a month at home or who have more than five tantrums a day outside of the home may have a serious psychiatric problem.

Fourthly, if children constantly have temper tantrums that last more than twenty-five minutes, it may be a sign of another underlying problem. Keep in mind, though, that a child may have a very long tantrum and be completely normal. It’s when a child continuously has tantrums exceeding twenty-five minutes that a child may have another issue causing it.

Fifthly, if a child cannot calm him/herself down after a tantrum, it may be another red flag that a problem is occurring. These children often require some bribery or physical removal from the situation to calm them down.

If your child is experiencing one or more of these red flags, it may be a sign that s/he has some mental health problem. So what should you do?

Talk to your child’s pediatrician to see if there could be an underlying problem. Also, consider visiting a pediatric neuropsychologist for a broad assessment or see a child psychologist, who will help the child develop emotional control.

Rest assured that most children have tantrums. In fact, seven out of ten 18-24-month-olds throw tantrums, and about 75% of 3-5-year-olds have tantrums as well.